SHANGHAILANDERS AND THE QUEST FOR HOME

After a summer of research at home and abroad, Andrew Hillier brings us news from the colonial Hillier clan – this time exploring the relationship between colonial families and their transnational homes. Where, after all, was “home” for colonial families? And in what ways was the answer to that question configured around families, buildings and identities of belonging?

Houses can provide a rich source for examining the relationship between family and empire, embodying both the connections and dislocations wrought by colonial life and also the notional ‘home’ to which a colonial family might aspire and then find wanting on its return from a life overseas. To explore what part these factors played in the late lives of my great grand-parents, Harry and Maggie Hillier (see my earlier post Family and Empire in Colonial China), I recently went in search of two of their homes, one in England and one in Shanghai.

The Hillier family at Burnt Oak

Harry Hillier retired in 1910 after forty years in the Chinese Maritime Customs, for the last twenty of which he had served as Commissioner in various Treaty Ports. Brought up in England, he had come to China in his early twenties and, following the death of his first wife, married Maggie Drummond, the daughter of a successful Shanghai barrister, William Venn Drummond. Life in the Customs Service was extremely peripatetic, frequently leaving its staff deracinated, and Harry and Maggie both yearned for a home in England when he retired. This they eventually found in the rolling countryside of the Sussex Weald. Set just outside the village of Waldron, Burnt Oak was a relatively modest Victorian house but one which gave them the extensive garden they had always longed for.

In August 1914, on the eve of the First World War, Harold (my grand-father) and his younger brother, Geoffrey, came to stay with their parents for the Bank Holiday week-end. As Harold later related, walking back from church on Sunday, their mother turned to them and asked if they would both join up. ‘Of course’, they replied, ‘and nothing more was said on that subject’. Harry survived four years at the Front but Geoff was killed in Germany’s Spring offensive in March 1918. The telegram – ‘Missing: no details known’ – was delivered to his parents at Burnt Oak.

When I visited the house in May, I found it still much as it appeared in the photographs taken 100 years ago. I took the same route to and from the church and, with the Vicar saying a prayer, placed a lighted candle beside Geoff’s name on the Roll of Honour. For his parents, his death was, in Harold’s words, ‘almost unbearable’. Already in ill-health, Harry died six years later. Although Harold and his sister were both living and bringing up families in England, Maggie, remembering the comforts of Shanghai, could not adjust to the life of post-war England. Following Harry’s death, at the age of sixty, she went back to China to live with her mother, Christian Drummond, whom she had not seen for some fourteen years. My next task step was to find their home in Shanghai.

By the early 1880s, William Drummond had already established a substantial practice in Shanghai and was living in style. Sometime in the 1890s, he built himself a sumptuous mansion- Dennarrt – set in extensive grounds on the outskirts of the British Settlement. Although this was some ten years after Maggie had left home, she stayed there frequently and Harry and his brother, Guy Hillier, lived there for lengthy periods during assignments in the Treaty Port in the early 1900s. It was also the house where Drummond entertained his clients, both British and Chinese and it featured prominently in the vanity publication, Arnold Wright’s Twentieth Century Impressions of Hong Kong, Shanghai, and other Treaty Ports of China: Their History People, Commerce, Industries and Resources (1908).

Dennartt – tea on the lawn

But despite this apparently glittering life, the family was beset by misfortune: two of the children died, their surviving son, Herbert, left to live in England and Drummond’s wealth began to decline as a result of failed investments. By the time of Maggie’s return in 1924, her father was dead, the main house had been sold and her mother was living alone in one of the smaller houses on the estate.

Although Dennartt appears in a number of books dealing with the Settlement’s Western architecture, they were vague as to whether it still existed, let alone as to its whereabouts. This was partly because, in modern-day Shanghai, the road on which it was built, the Siccawei Road, was nowhere near the area where Westerners had had such mansions. By chance, I discovered from an old map, that in the early 1900s, ‘Siccawei Road’, was in a completely different part of the Settlement, close to the fashionable Bubbling Well Road where wealthy Westerners and Chinese certainly had lived. With the help of Tessa Johnston, a celebrated writer on Shanghai’s early twentieth century architecture, I was able to work out that the house was, or at least had been, at the end of what was now an alley of small dwellings (hutong). On my first two visits, unfriendly security guards shooed me away before I could even see whether it was still standing. But fortunately, on my third visit, the guard was briefly away from his post. I slipped through the gate and there was the house, set back to my left, looking much as it did in the photographs, if less grand. In the front, part of the lawn remained, together with a Cedar of Lebanon. I snapped my photos and drank deeply. 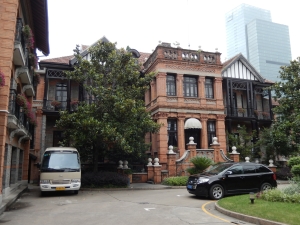 This had been the Drummond family home for some fifteen to twenty years. On the one hand, its elaborate architecture represented the arrogance of Britain’s presence in China; on the other, Drummond had acted for a substantial Chinese clientele drawn from the merchants and compradores who formed an important part of the Treaty Port’s commercial world, and who regularly visited the house. Still standing were the hutong which had first been built in 1912 and then gradually spread across the estate as land was sold off. Here, Maggie and her mother, Christian, lived for the next four years, Maggie dying in 1928 and her mother the following year at the age of 84. Although they were away from their children and in straitened circumstances, for these Shanghailanders, this was their true ‘home’ and this is where they wanted to end their days.

1 Response to SHANGHAILANDERS AND THE QUEST FOR HOME